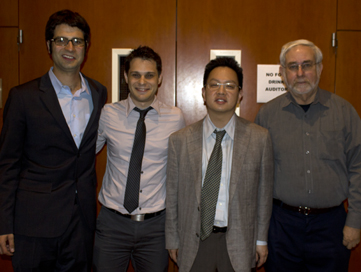 An Evening with Author Ned Vizzini

Ned Vizzini was the author of four acclaimed young adult books: It’s Kind of a Funny Story, Be More Chill, Teen Angst? Naaah…., and The Other Normals.  Ned had spoken at over 200 schools, universities, and libraries around the world about writing and mental health.  He wrote about books in the New York Times Book Review and the L Magazine.  His work has been translated into seven languages.   In 2010, Focus Features adapted It’s Kind of a Funny Story to film written and directed by Anna Boden and Ryan Fleck.  In 2013, Ned co-wrote the young adult novel, House of Secrets with filmmaker/writer Chris Columbus which was followed by the sequel, House of Secrets: Battle of the Beasts in 2015.

At the Media and Medicine for Communities event, Ned spoke about his personal journey with depression and writing It’s Kind of a Funny Story which was followed by a Q&A on writing and mental health co-moderated by Dr. Bowen Chung, a UCLA child psychiatrist, and Ron Schraiber from the Los Angeles Department of Mental Health.  The UCLA Center for Health Services and Society proudly presented Ned with their Award for Excellence in Public Advocacy Through the Arts.

The faculty/staff at the UCLA Center for Health Services and Society were deeply saddened by the loss of Ned Vizzini and express their heartfelt sympathy to Ned’s family and friends. 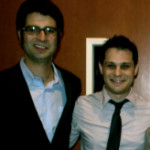 I met Ned Vizzini in Sarasota, FL. I was visiting my parents for the Thanksgiving holiday and Ned just happened to be speaking at Sarasota Memorial about his experience with depression. I was going through my own rough patch at that time and his presentation was the motivation I needed. Earlier that summer I had contacted Ned, after reading his acclaimed semi-biographical novel “It’s Kind of a Funny Story”, to inquire if he would be interested in speaking at UCLA since the research center I worked at focused on depression outreach/education in Los Angeles with an organization called UCLA Media and Medicine for Communities. My goal was to screen the film based on “It’s Kind of a Funny Story” followed by a Q&A and discussion about depression with Ned. I wasn’t able to make the screening happen for UCLA, but Ned and I kept in touch in hopes we could still work something out to host an event with just him since he gave great motivational talks. And then on that trip to Florida, I saw an ad in my parents’ local newspaper that Ned would be in Sarasota. I e-mailed Ned that I just happened to be in Sarasota and would be there. Ned’s a great public speaker and after witnessing his inspirational presentation, I knew the UCLA community would greatly benefit from it. After the Sarasota event, we finally met after months of e-mail exchanges and we got right into talking about movies. We had both enjoyed Edgar Wright’s Scott Pilgrim Vs. the World which came out that summer and we thought it was a fresh new take on movies. He invited me to check out a band at The Echo in Silver Lake when I got back to LA. I would soon find out that he had the coolest taste in music. At the concert, I let him know that I was still trying to make it work for him to speak at UCLA and offered the date of February 8, 2011, which coincided with the DVD release of the film. And we wanted to present him with a special award (UCLA Media & Medicine Award for Excellence in Public Advocacy Through the Arts) that I had the honor to present to him.

He spoke about his personal journey with depression and suicide and gave some great messages of hope, for one–“Keep your antennae up.” He answered questions and signed copies of his books, but the most moving part of that night was when a high school student told Ned she took a five hour (it might have been more) bus ride just to get the chance to meet her favorite author. He took time out to talk to her and take a picture.

Here’s what I have come to learn about Ned these past few years: he is one of the most gracious, humble, enthusiastic and coolest persons I have met who always had a smile on his face. He answered every e-mail, responded to all his fans, and gave hope to a generation who felt lost. I looked up to him. He was living the writing dream and soon found himself on a few TV shows (Teen Wolf, Last Resort) as a staff writer. Ned’s new book, “The Other Normals”, was debuting in the Fall of 2012 and he was invited to read an excerpt from it and compete in an LA Literary Death Match.  I gathered up some friends to support him at the event and he ended up winning the medal. There were probably dozens of people he knew at that event, but he spent most of the time hanging out and talking to my friends and I. We talked about movies of course and exchanged screenplay stories. And then I would learn he was hired to co-write a new book series, “House of Secrets”, with one of my film idols, Chris Columbus. Ned and Chris came to NYC to promote the book at Barnes & Noble in April 2013. I met one of my writing idols that day and was so happy for Ned, but sadly that would be the last time I saw Ned. I was excited to learn that soon after Ned would be working on Alfonso Cuaron’s & J.J. Abram’s new television series Believe. And I was hoping to catch up with him when I went back to LA for the summer, but that didn’t happen. On December 19, I logged onto Facebook and noticed “RIP” messages in my newsfeed addressed on Ned’s page.  My heart suddenly sank.  This couldn’t be true.  The next day it was confirmed, Ned had passed away from suicide.  I felt empty–someone I looked up to and gave me hope when I needed it most, was no longer here.  I felt truly grateful to know Ned, not only a gifted writer but such a kind soul and my thoughts and prayers continue to be with all his family and friends.  When I think of Ned, I still think of hope. He gave me hope that day in Sarasota.  And I will continue to keep my antennae up.  Ned will always be remembered as a great guy, a guy who gave a voice to depression and inspired a generation young and old.  Thank you Ned.  May you rest in peace and know your friendship will be cherished and your life and stories will be celebrated.

If you or someone you know is in need of urgent help, please know that seeking help is not a sign of weakness.  You may reach the National Suicide Hotline 24 hours a day/7 days a week at 1-800-273-8255 or visit http://www.suicidepreventionlifeline.org for more information. If you live in Orange and Los Angeles County, please call the toll free 24 Hour Suicide Prevention Crisis Line at 1-(877) 7-CRISIS or 1-877-727-4747.